There’s always a price to be paid for early adoption of technology. 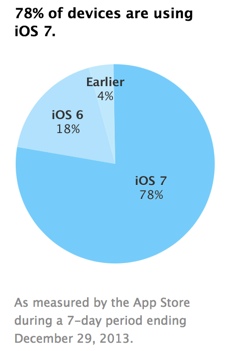 Earlier this week, MG Siegler wrote an article entitled I Got Bugs, critical of the quality of Apple iOS 7.

I remain convinced that in just about every way, iOS 7 is a huge upgrade over the previous iterations. Except one. And it’s a big one. The software is so inexplicably and inexcusably buggy.

I experience some minor issues with iOS 7 on both my iPhone 5 and iPad 2. But the experience has been largely positive. Besides, like everyone else I really wanted to be an early adopter to start using new features, assuming Apple would fix anything “critical”. They have – we’re on 7.0.4. We haven’t seen iOS 7.1 yet (although it’s now in beta) because it’s a more substantial release. And like most companies, Apple slows down for the US holidays in November and December. We don’t hear as much about Android bugs because so few Android devices are running the latest Android 4.4 OS (aka KitKat). And there’s not enough users of Microsoft Windows Phone, Microsoft Windows RT tablets, or Blackberry 10 devices to bother writing about. 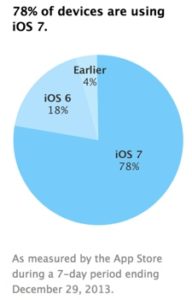 Apple’s own statistics, posted on the Apple developers web site, show that iOS 7 adoption is at 78% as of the end of December 2013. That’s very impressive for an operating system that was only released in mid-September. Although there is criticism of iOS 7 and the new versions of iWork applications, Apple is to be commended for how much hardware, software, and iCloud services were shipped last September. Due to their tight integration, everything from iOS 7 to OS X Mavericks‎ to Safari to iTunes and iWork apps had to be released simultaneously. I’m sure there are many in Cupertino grateful that no “antennagate” (see related Daring Fireball article, Antennagate Bottom Line) or iOS 6 Maps fiasco (see related Daring Fireball article, Pogue on iOS 6 Maps) has emerged from this year’s updates (I’m not sure iWork frustration counts as a fiasco). Although adoption is very high, it’s still not 100%, with 18% of users still on iOS 6 and 4% on an even earlier version (the latter most likely due to device incompatibility, such as the original iPad).

Count my mom among the iPad users still using iOS 6. Although I updated her MacBook Air to Mavericks 10.9.1 over the Christmas holiday, I’m keeping her iPad 2 on iOS 6 until iOS 7.1 is released. My mom will appreciate the automatic app update feature, but I’m waiting for a more stable version before having to explain to her the nuances of the revised multitasking, notification center, and command center features.

There are no parallels for the rate of user adoption seen with iOS. Consumers largely remained on Windows XP, avoiding Vista in favor of Windows 7. But many users are staying on the 12-year-old OS even though it will be officially retired in April. Enterprise adoption tends to be even more conservative than consumer adoption. “Dot-zero” releases are routinely shunned until not only the “dot-one” release appears, but enough early adopters have taken the plunge and given their blessing. (Although most Microsoft users are sticking with Windows 7 even though Windows 8 recently received a “dot-one” 8.1 update).

Consider SAP BusinessObjects Business Intelligence 4.0, the first major release of the platform since SAP’s 2008 acquisition of BusinessObjects. The product went through a lengthier than usual ramp-up period during 2011 before becoming generally available on September 16, 2011. The product received a lot of new features with the introduction of Feature Pack 3 on June 15, 2012. Originally intended to be called BI 4.1, I’m still unsure if the release was renamed “Feature Pack 3” to increase adoption or to suppress it until the more stable BI 4.1 was released on August 29, 2013.

As a consultant, I’ve been grateful to work on several BI 4.0 projects instead of being stuck on XI R2 or XI 3.1. But there have been adoption hurdles. And although any customer is frustrated when a project is delayed due to software bugs, most adopters of BI 4.0 understood the risk and perceived enough benefits from upgrading to take that risk.

But the “dot-one” release isn’t always a panacea for user adoption. Although BI 4.1 has both more stability and features than it’s now two-year-old predecessor, it isn’t without issues. After releasing a glowing endorsement of the new Support Pack 2 on Monday (see related article on the EV Technologies blog, State of the SAP BusinessObjects BI 4.0 Upgrade, January 2014), I discovered on Tuesday that even the most basic of publications using the sample eFashion universe won’t work properly, let alone mission-critical publications (see related article on the SAP Community Network, Publications Fail). And no scheduled documents, publications or otherwise, can be sent to the Mobile BI Inbox (see related SAP KB 1967424- Reports scheduled to BI inbox not visible in SAP BI app for iOS in BI 4.1). Ouch!

Should customers kicking off BI 4.1 migration projects apply the brakes? Absolutely not. There’s a lot of work to be done regressing testing existing content on a BI 4.1 development platform, which will most likely be patched between project kickoff and go-live anyway. And administrators, developers, and power users need at least a BI 4.1 sandbox to start exploring the new platform’s features. But unfortunately, BI 4.1 is starting to show more in common with Windows 8.1 instead of iOS 7.1.

The introduction of iOS 7 brings an extra adoption wrinkle for both SAP and the organizations that deploy SAP BusinessObjects Mobile BI (see related article, SAP BusinessObjects Mobile BI 5.1 for iOS). Because iOS 7 can automatically update a user’s apps, mobile app quality has to be guaranteed on day one of its release. And the product documentation should be ready, too.

Bottom line, there’s always a price to be paid for early adoption. In many cases, it’s a price worth paying. But always be prepared for the risks, seen and unseen.

Are you an Apple user on the iOS 7 bandwagon? Or a SAP BusinessObjects user on the BI 4.0 or BI 4.1 bandwagon? Would love to hear your comments, as always.

One thought on “The Price of Early Adoption”