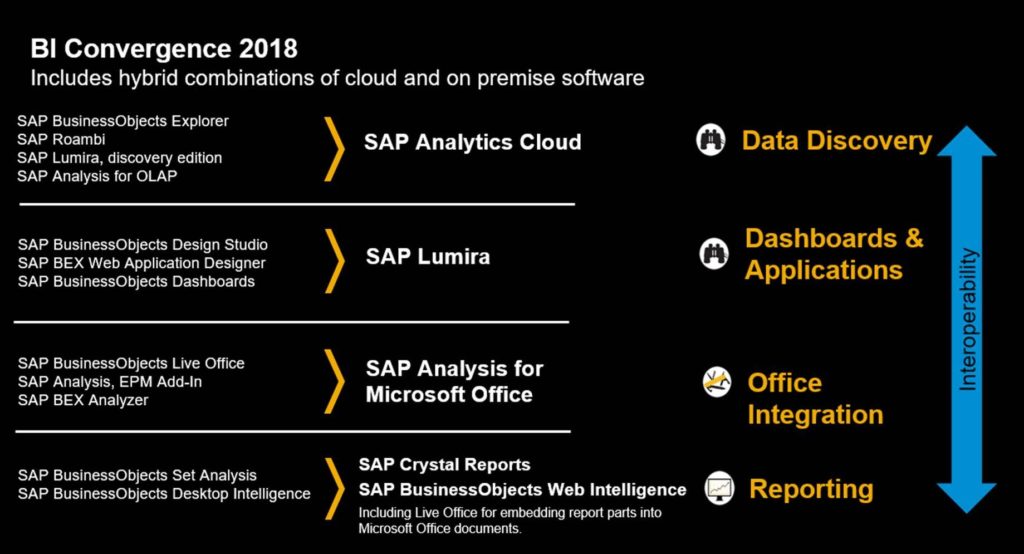 You’ve probably never heard of Benard Ighner. But in 1974 he penned a song entitled “Everything Must Change” which he performed on the Quincy Jones album Body Heat. Since then, the song has been widely covered by artists in the pop, jazz and R&B genres.

Everyone must change
Nothing stays the same.
The young become the old,
Mysteries do unfold.
‘Cause that’s the way of time
Nothing and no one goes unchanged.

Everything Must Change by Benard Ighner

Last month, SAP analytics executive Mike Flannagan published a February 7, 2018 blog that was a prelude to a February 15, 2018 #askSAP webinar. His blog was entitled A Deeper Look into SAP’s BI and Analytics Strategy and made two key points, one intentional and one not.

First, the intentional message was that SAP is focusing on one data discovery solution, SAP Analytics Cloud. This means that SAP Lumira Discovery- freshly released in 2017 after an extensive and lengthy redesign- will only see small maintenance releases during 2018 and 2019 while SAP Analytics Cloud will continue to be updated every two weeks. Many SAP analytics customers will be unaffected by this announcement, as they have settled on a best-in-breed analytics strategy with Tableau, Qlik, or Microsoft PowerBI as their tool of choice. There will be some disgruntled customers who bought into SAP Lumira, which does not have an automatic migration path to SAP Analytics Cloud.

SAP is to be commended for its current strategy of continuous innovation via support packs, which will continue into 2018 with SAP BusinessObjects BI 4.2 Support Pack 6 being released in the July 2018 time frame and Support Pack 7 being released in the December 2018 time frame. However, contrary to any “rumors” that you may have heard, there are no current plans for SAP BusinessObjects Business Intelligence 4.3. This is unfortunate, because there are significant innovations that need to come to the BI platform but won’t on a support pack budget. And according to SAP’s roadmap, the BI platform will become an innovation-free zone, as any cool and modern technology will only be added to SAP Analytics Cloud.

SAP’s new analytics strategy has significant impacts for its customers who love the on-premise (but also cloud-ready) BI platform. Its strategy even has significant impacts for analytics professionals such as myself who find themselves at a skills crossroads. The SAP BI platform isn’t quite dead (heck, Desktop Intelligence has been dead for years and many of you are still out there using it!), but it’s no longer a solid foundation for a career with analytics- SAP or otherwise. I’ll be exploring both of these angles in future blog posts.

Nothing and no one goes unchanged. But for now, enjoy a two-minute, heart-pounding arrangement of “Everything Must Change,” performed by the world-champion Blue Devils drum corps in their 2017 show, “Metamorph”.

Is your organization’s analytics strategy changing in response to SAP’s recent announcements? Share your thoughts in the comments below.

5 thoughts on “Everything Must Change”