SAP is listening to our concerns about promotion management on the BI platform.

It’s generally not a good idea to tweet when you’re angry. And I really try hard not to. But sometimes- in a moment of weakness- I’ve been known to say unkind things about SAP BusinessObjects BI 4.0 Promotion Management.

Promotion Management is a feature of the Central Management Console that, along with Version Management and Visual Difference, business intelligence administrators use to move content through a software development lifecycle (SDLC) from one environment to another. For example, from development to test to production. Promotion Management is usually one of the last things that you use in a BI4 migration project. All eyes are watching you. And it’s a really unpleasant feeling to be diagnosing why your job failed to promote properly in the 11th hour. Trust me, I know from experience.

While nobody has gotten fired for using Promotion Management (at least to my knowledge), neither has anybody gotten a promotion by using it.

Promotion Management can drive you to your knees in prayer… 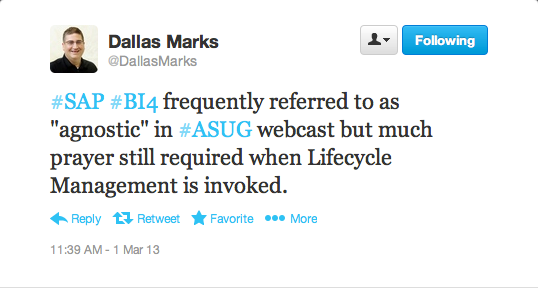 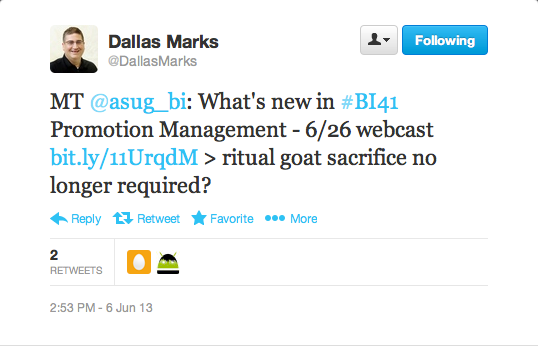 Promotion Management can drive you to drink… 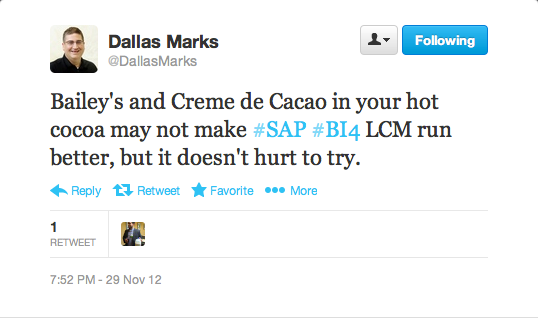 Or it can lead you to wonder what the Promotion Management development team has been drinking. Or smoking. 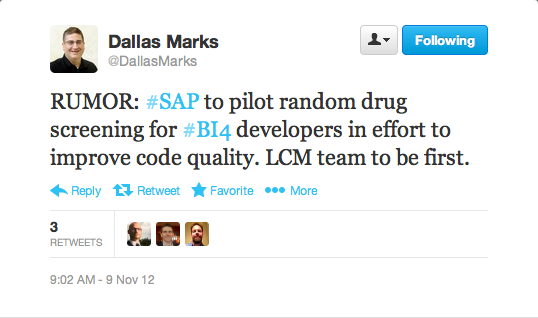 This week, ASUG sponsored webcast What is New in BI 4.1 Promotion Management with Kai Chan of SAP. Promotion Management has officially been given a promotion in SAP BusinessObjects BI 4.1, which should go into general availability (GA) later this year. Beyond roadmaps and features, the most important thing that Kai said was that SAP was listening to customer concerns about lifecycle management and working to resolve them. SAP has even taken the bold step of reassigning development of Promotion Management to a new team in Vancouver, BC. 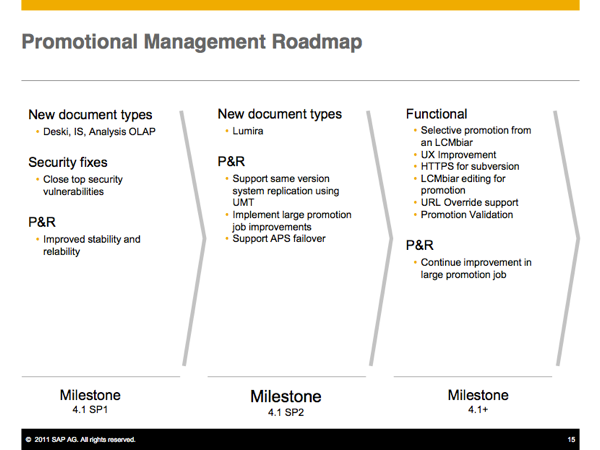 I’m grateful that SAP is taking these steps (see related article, Collaboration). As you can see from the roadmap above, it’s unlikely that all of our concerns will be addressed by the time of 4.1 GA. But like the SAP Lumira team, the Promotion Management team will be taking small steps with each minor release and not making us wait for a major one.

With Promotion Management working better than ever, perhaps I’ll earn a promotion, too.

#SAP #BI41 #LCM is getting on my tits today. Anyone seen this error before when trying to import an override file? http://t.co/lcfHnVmOaw

How do you feel about SAP’s recent announcements about Promotion Management?

One thought on “Promotion Management gets a Promotion”