SAP quietly introduced SAP BusinessObjects Explorer 4.0.6 for iOS last week. Unlike its SAP BusinessObjects BI Mobile cousin, Explorer for iOS supports the Apple iPhone in addition to the Apple iPad. The first thing you might notice about the update is that the icon has been updated from yellow to green. This is a welcome change, as users with many SAP apps struggle to identify the desired app amidst a sea of yellow icons. 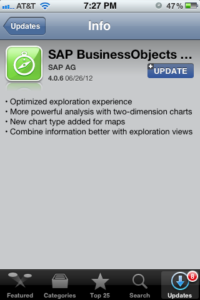 As you can see from the screen shot below (click to enlarge), this release brings an “optimized exploration experience”, not to be confused with the Jamie Oswald Experience. This means that a single app now reunites the previous version of Explorer with it’s short-lived successor SAP BusinessObjects Experience, which was released separately to show off Exploration Views while we waited for the general availability of the SAP BusinessObjects Business Intelligence 4.0 Feature Pack 3.

Users of SAP BusinessObjects Explorer on the iPhone should note that version 4.0.6 only works with SAP BusinessObjects Business Intelligence 4.0 SP2 or earlier (in other words, the XI 3.1 platform). It is unclear whether SAP is phasing out support for the iPhone or simply needs more time to provide a scaled version of exploration views on the smaller device.

SAP Product Teams are working on providing a Road Map for this functionality. No external date can be provided currently, but as soon as it is, this Knowledge Base will be updated with a link to the Product Roadmap. 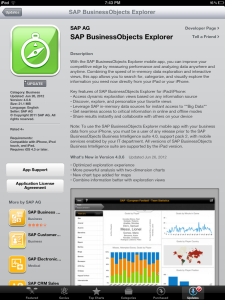 Although I’ve anxiously awaited this release, I’m a bit disappointed in the documentation. Here is an opportunity for the mobile Explorer product team to learn from their peers on the SAP BusinessObjects Mobile team, who recently released version 4.1.2 (see below, click to enlarge). In contrast to the Explorer team, the Mobile folks clearly tell us that iOS 5.1 (the latest edition of iOS) is supported. This information is important, as previous versions of the app have been broken by the latest iOS update. In addition, the Mobile team provides the SAP Note numbers that contain links to product documentation. As of this writing, any SAP Notes and the documentation for Explorer 4.0.6 is still missing in action. This could lead to an awkward scenario where users are choosing to update their iOS apps before the BI Platform team is ready to support it. 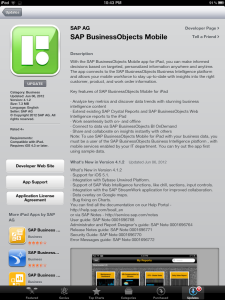 Until then, happy exploring!